“La Romanée Memories” | In the cellar with Philippe Prost

Exceptional auctions, People of the vine 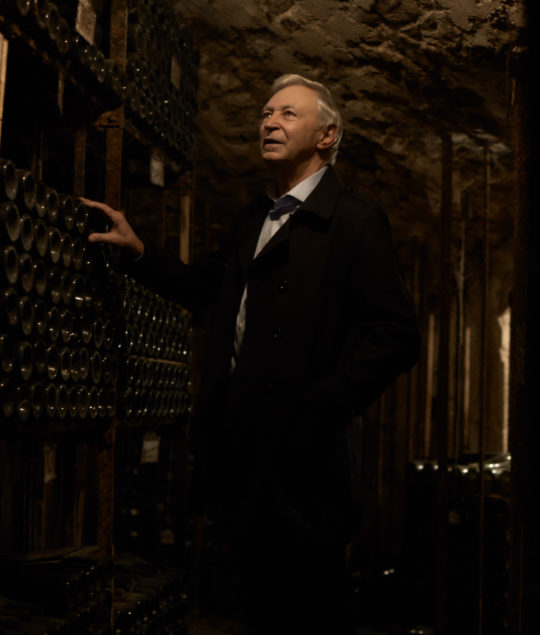 “ We have a treasure : it’s the terroir. Here we’re talking about an appellation — La Romanée — where the terroir is so expressive. ”
—

Baghera/wines:  Tell us about the plot of La Romanée...

Philippe Prost, Ambassador, Bouchard Père & Fils : To be able to talk about this plot, you have to have been there, you really have to have seen it. It’s truly something remarkable, completely different from Romanée-Conti. We are above la Romanée-Conti on a very interesting south-north orientation. There is a certain gradient, 10 to 12%. We are at the foot of the Vosne-Romanée les Reignots and the very fact of having invested this orientation, a rein against erosion, allows us to preserve the soil. The originality of the soil lies in a small limestone pebble which comes down from the Reignots and has settled there, and this forms a deeper, more temperate soil. In my opinion, this is a truly wonderful orientation, which can also be found on the Côte de Beaune and on some of the grands crus of the Côte de Nuits. It is also a way of protecting the fruit under the leaves at the hottest moments of the day. You know what we are going through today with climate change, well in the nineteenth century also, there were years with extreme heat and drought, such as 1865. So, protecting the fruit under the foliage is a way to avoid the plant experiencing water stress.

This plot has lived through different eras with different share-cropping domains in charge of its cultivation. When you are a sharecropper, you vinify the fruit of the work of a whole year, it’s a way of understanding what happens throughout the year! That’s what it means to listen to the plants. I think that being a sharecropper and taking charge of the vinification is a powerful symbol. The fact that a sharecropper does take charge of the vinification is truly the continuity of the whole year’s work. We have a treasure: it’s the terroir. Here we’re talking about an appellation — La Romanée — where the terroir is so expressive. There is a transferral in which we all have a common role to play: that of passing on the “ message of the terroir ”. That above all else.

To know the vintages, to know the plant, it’s a wonderful thing because it allows you to respond to them in a way which is completely in tune with what is happening. Working to fine-tune the “ vintage character ” a little, but also trying to develop the unique message of the terroir: that’s something tremendous. You have to understand the notion of Grand Cru: there is an entity that comes from the soil, a signature note, a message that is so strong that the influence of the vintage can be crushed. Each time there are the same signature notes, the same messages and the same aromatic reminder: it is the signature of the terroir, it is something unique. It is essential to avoid any crushing of these signature notes, by a winemaker’s ego, and to respect the balance. You always have to work on balance and texture, that’s important.

Vinification is not a whole in itself, it is one step in the growth of this fruit and the expression of the terroir. In maturing, everything is important, in each season, in each task (racking etc.) one has to be capable of making decisions, without exigency, without expediency.

Being capable of making every decision at the right time is fundamental. For us, La Romanée requires a minimum of 14 to 16 months of aging, to allow for almost a year of barrel maturing on the original lees. It is also important to pay attention to the work of the cask: a message passes through the cask and we work in balance. At Bouchard Père & Fils, we do not like our own expressions to be too distinct and to risk tainting the expression of the terroir through other artifices. The cask has to be an accompanist, it provides a background of course but we are careful not to let it become dominant.

“ Not working in haste, really listening to the maturing of the wine and nurturing it towards its fullest expression before bottling it, that is something precious.”

With the potential of Bouchard Père & Fils, we really do have great tools: we never work in haste, we remain attentive in order to always to respond propitiously. You, yourself, have seen the cellars where the wines are aged, where they will not suffer any climatic hazards, here they will not be subjected to a rise in temperature. Not working in haste, really listening to the maturing of the wine and nurturing it towards its fullest expression before bottling it, that is something precious. Exercising a certain caution ; I am referring to the woody expression, we prefer it to be kept discreet and never become dominant. We pay the utmost attention to this. The spirit, the philosophy of Bouchard Père & Fils, is the will to continue this expression of terroir and above all not to mask it or risk tainting it, with an overly woody background.

The Forey family carried out sharecropping from 1946, just after the war, until 2001: this means there was a succession from the grandfather’s role as sharecropper to the father and finally to the grandson, and this is quite remarkable! The members of the Forey family have worked with their knowledge of the La Romanée plot since they were very young. They have worked there continually with respect for the winemaking philosophy and the working of the vines. Between 1946 and 2001, there existed a “family” flair for listening, and there was a man-plant relationship over 3 generations which was really something wonderful. That’s 11,000 vines per hectare, 11,000 individual characters: that’s Burgundy and the work of sharecropper from one generation to the next, that’s really our fundamental truth here in Burgundy. We left it to the Forey family to vinify, we were responsible for the maturing, just as Leroy was responsible for a while. The Bichot house has also been responsible for this maturing, bottling and distribution. We took charge of the distribution exclusively from 1976 to 2001.

“ La Romanée 1988 is almost like a tiger. There is even a tawny aspect that we find in the aromas, but there is also something very expansive, a power, a dominance.
It’s not the lord of the jungle, but it’s something that automatically commands respect.”

Tell us about some of the vintages of La Romanée that you have chaperoned ...

I would like to talk to you about the 1987 and 1988 vintages. 1987, a slightly difficult year and 1988, a fuller year with a lot more energy, something more concentrated. A certain severity at the beginning... but in the end in La Romanée there is never severity. Talking about tasting La Romanée, we find the same signature notes, the same aromatic definition. But at the same time, one is in the presence of “characters”. For me, La Romanée 1988 is almost like a tiger. There is even a tawny aspect that we find in the aromas, but there is also something very expansive, a power, a dominance. It’s not the lord of the jungle, but it’s something that automatically commands respect. We are trusting, we are in admiration before so much power. I love this type of expression.

1987 is a slightly weaker vintage, yet when one tastes the Romanée 1987, there is something airy, delicate, like the tightrope walker on his wire: there is a tension. Somehow everything is in balance, but it is totally subtle. One recognises and fully respects the composition of this delicate and harmonious wine.

When I arrived in the maison Bouchard Père & Fils in 1978, we had a second vintage of La Romanée to take care of: it was the 1977 vintage. Every time we refer to this 1977 vintage, we evoke that very cold year, something rather severe, rather difficult, but you have to experience the Romanée 1977. I find it very noble. An image immediately comes to mind, it could be “ Don Quixote ” seen by Giacometti, with all its sleekness. When you look at it, you automatically look upwards, it’s subliminal. When tasting the Romanée 1977, one has the impression of a peacock’s tail in the mouth. It is something that takes over the mouth and it is the terroir that dominates and the vintage is completely forgotten. We only have one thing in mind: it is La Romanée in a very beautiful expression.

I am also thinking of two other vintages that I’ve accompanied, where the maturing was so important: the years 2002 and 2003, two vintages that are so very different. For me the expression of La Romanée 2003 is Atlas. It doesn’t carry the earth, but the sun. He is there before you and you are in awe of his musculature. In the structure, one recognises a richness and yields to being crushed by the sun’s rays, but at the same time one can’t help but admire the concentration.

Alongside 2003, which was caricatural but which despite everything still strongly retains the La Romanée signature, 2002 comes to mind. The 2002 vintage has something sharp, it’s a katana, it’s a sword, it’s a stroke of the blade, something very chiselled in the beginning but which has grown wonderfully over time. Today this acidic medium helps the aroma and we definately recognise, as always, vintage after vintage, the signature notes of La Romanée. It is still the message of La Romanée, but each year through a different definition of the vintage, each with its own specific aging requirements, vintage after vintage. We bottled 2002 and 2003 in the same year — with a much longer maturing time for 2002 of course, but we had to let it flourish in order to be ready for Christmas Eve 2004.

2002 and 2003 are very different in their structures but when you look at the pleasure that each one procures you really are looking at two exceptional Romanée wines.